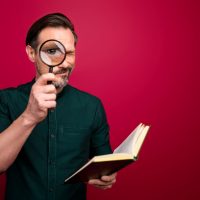 We have discussed scam heir hunters before. Specifically, several heir hunter companies were recently convicted by the U.S. Department of Justice (DOJ) for violating federal anti-competition law. However, they are still plying their trade. The forensic genealogy team at Von Langen recently completed another assignment where we thwarted those heir hunters, Kemp & Associates, Inc., who had falsely identified a person completely unrelated to the decedent as an heir to their estate. Read on for details about their false identification and our response. Reach out to a qualified forensic genealogist for legitimate, experienced help identifying the proper heirs to an estate.

The matter concerned the estate of a man named Burrell Elkin Johnson, who died in October 2019 in Nashville, Tennessee. He died intestate, meaning that he left no valid will to dictate the distribution of his estate. Although it appeared that Mr. Johnson passed away without any surviving children or parents, the purported “genealogical research firm” Kemp & Associates undertook an unauthorized search to find any possible heir. A researcher from Kemp filed an affidavit claiming that they had uncovered a living cousin of Mr. Johnson, a Jane Johnson Loveall. They identified the cousin through a purported shared grandfather between Mrs. Loveall and Mr. Johnson, a Mr. James E. Johnson. Kemp filed a claim in the probate court and alleging Mrs. Loveall was a cousin and heir to Mr. Johnson’s estate.

The Administrator of Mr. Johnson’s estate sought to verify Kemp’s findings and retained the forensic genealogy team at Von Langen, LLC, for help. We discovered that Mr. Johnson did indeed have a paternal grandfather named James Edward Johnson. It was not, however, the same James Johnson identified by Kemp. While Kemp had found a James Johnson, that James Johnson died in October 1927. The actual grandfather of the decedent in this case died in July 1958. We discovered this fact by reviewing various records, including the decedent’s father’s birth record, his death certificate, his obituary, and other documents.

The actual paternal grandfather of Burrell Elkin Johnson did have other children, who had children themselves. We were able to locate an actual heir to Mr. Johnson’s estate: The great-grandson of Mr. Johnson’s true grandfather. The case shows just how easily an unscrupulous and profit-seeking heir hunter can nearly deprive the true heirs of an inheritance they are due from an estate. As forensic genealogists, we were able to ensure that this estate administrator distributes the inheritance to the proper heirs.

“Comes now Kemp & Associates and gives notice to the Court and all interested parties that attorney Alison T. Ryan on Donati Law, PLLC, withdraws entry of appearance on behalf of Kemp & Associates, filed March 6, 2020, on behalf of Jane Loveall. Information and research has revealed that Ms. Loveall is not as an heir at law of the estate of Burrell Elkin Johnson and is not being identified as such by any parties” – Document filed in the Seventh Circuit Court for Davidson County, Tennessee Probate Division

If you’re an estate administrator in need of skilled help in evaluating the legitimacy of heir hunter’s claims put forth on behalf of purported heirs and or with identifying and locating missing heirs, contact the diligent forensic genealogists Von Langen, LLC at 800-525-7722.